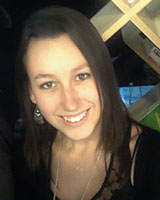 Heather, who studied Applied Psychology in the School of Life Sciences, now works as an Honorary Assistant Psychologist at the Royal Hospital for Sick Children.

How did your degree help you on your chosen career path?

After graduating with a Psychology degree from Heriot-Watt, I was able to get a job as a Support Worker with children and adults with mental difficulties, including schizophrenia, depression and OCD. The theories learned throughout my degree gave me a better understanding of what my supportees were going through and helped me to plot realistic goals for them to work towards.

Is your career progressing in the way that you hoped it would?

Yes it is. Due to the successful implementation of my theoretical knowledge, I was quickly given a higher level job overseeing support workers who were specialising in autism. I was in South Korea teaching English to children, and developed a programme in my school to help children with ADHD. I am currently working at the Royal Hospital for Sick Children as an Honorary Assistant Psychologist. Thanks to my degree at Heriot-Watt, and the advice that the lecturers gave us on pursuing our career paths, I will soon be applying to study a Clinical Doctorate.

We are ranked at a high level across a number of key university league tables.

Find the teaching timetable for your campus and programme.