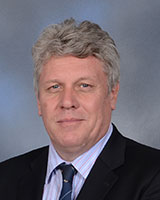 Stewart Seatter graduated with a BSc in Offshore Engineering from Heriot-Watt's Edinburgh campus in 1981.

Stewart has strong family ties to Heriot-Watt, being the third generation of his family to graduate in Engineering. Read more in News.

He worked for Lundin Oil and Shell before becoming General Manager of Murphy Oil in Malaysia, working on its new Malaysian Greenfield exploitation programme.

As the CEO of Source Venture Consultants, he specialised in advising on marginal oil and gas field strategy.

He is now Engineering Director for Worley Parsons Arabia.