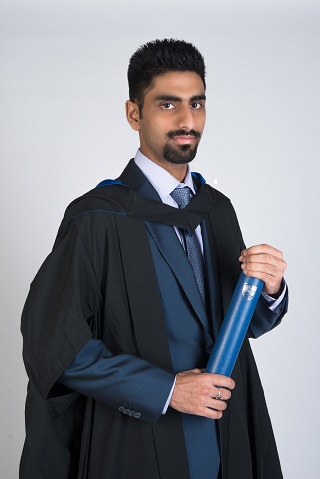 What did you study at Heriot-Watt University Dubai and why did you choose this university?

I did my bachelor’s degree in computer systems, taking up several subjects ranging from hardware design to software engineering, before graduating with my thesis in augmented reality.

Some amount of luck and research helped me zero down on Heriot-Watt. After my A-levels in Doha, Qatar I was preparing to relocate to Glasgow, to move in with my parents while also looking for a university close by. I looked up Heriot-Watt and it had an acceptable entry threshold for my A-level grades.

Heriot-Watt was also one of the good ranking university on the QS ranking website. Unfortunately, my visa process for UK was taking too long, hence I decided to enrol into the remote campus in Dubai as it was nearer. While there weren't offering all subjects at the Dubai campus, I was glad to know that the curriculum was the same across campuses.

How has studying this programme benefitted you?

The programme had a diverse list of offerings. It covered almost everything a young naïve programmer would want to discover, from theoretical topics to real-world applications.

Learning the basics of building web applications, database management and network security helped me land my first job at Marcura. The professors at the campus also inspired me to continue my studies in the field of artificial intelligence [AI], and helped provide recommendation letters for my progress. Today I am in Singapore, working as a full-time Java enterprise application developer at CrimsonLogic and studying AI for my masters at NTU Singapore where my skills are still relevant.

What’s been one of your most memorable or notable achievements during the course of your study?

My most notable achievement during my study was achieving the Andrew Steward Prize twice.

The second time I was awarded this prize was during my final year of study, when I was working on my thesis. Unfortunately, things didn’t go as planned. I was diagnosed with Crohn’s disease at the start of the academic year and had to return to India for my treatment. After a few months, my grandmother passed away and I had to return to India again. It was my final year and I missed several classes, but my professors, classmates, and the university helped me during the tough period by staying in touch, understanding my problems, and allowing me to continue my studies while I was away from the University.

Luckily, I entered remission towards the end of the academic year and was able to attend the graduation ceremony. I received the news of the Andrew Stewart Prize on the day of the ceremony which took me by surprise. It was a heart-warming moment for me to accept this prize in front of my classmates, family and professors who were there to support me through a tough time.

It made me realise that the faculty of the University cared for me as their student and recognised it through the award to celebrate this great achievement with me. It was a beautiful day and I still cherish the photos from that day.

Would you recommend the MACS school and its programmes to anyone and why?

When I had joined the MACS school in Dubai, it was relatively new and still setting up its infrastructure. There were few hiccups with the school when it came to teaching Java basics, elective course options, and internships. Towards the end of my study, I felt that the University was developing a strong foundation on the overall program and I hope it has carried that momentum.

Eventually, after the first two years of my study, I was able to enter global competitions, hackathons, work as a teaching assistant and get internships. I would recommend the MACS school because of the faculty’s teaching quality, which allows students to learn about diverse technical and sociotechnical subjects, inspiring them to constantly experiment with new ideas.