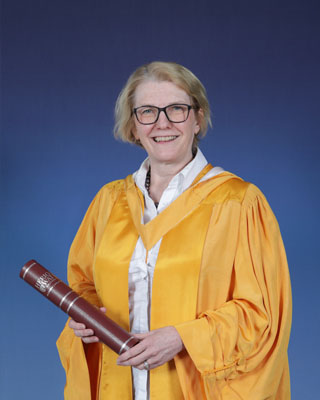 Shonaig Macpherson CBE, FRSE, DUniv, is Chair of the Robertson Trust, an independent grant maker distributing over £20m a year to charities in Scotland, which is the controlling shareholder of the Edrington Group, the international premium spirits company.

Qualified as a solicitor in England and Wales and Scotland, Shonaig’s executive career in the law concentrated on advising companies and individuals whose core assets were intellectual property, latterly as senior partner of McGrigors (now Pinsent Mason).

Since retiring from law, Shonaig has undertaken several non-executive roles including chairman of the National Trust for Scotland, Scottish Council for Development and Industry, The Princes Trust and The Royal Edinburgh Military Tattoo. With a strong commitment to education, Shonaig has served on the governing bodies of the University of Edinburgh, Edinburgh College of Art, the Royal Conservatoire of Scotland, the Open University, Heriot-Watt University and the University’s Edinburgh Business School.

In 2001, Shonaig was the first ever non-executive appointee to the management and strategic boards of Scottish Government where she became the first lay person to chair its audit committee. She was a member of the UK Government and Scottish Parliament’s Commission on Scottish Devolution (the Calman Commission), the Scottish Executive’s Culture Commission and the Knowledge Economy Task Force.

Shonaig is currently chair of the Royal Lyceum Theatre Company, the lead non-executive director of the Joint Management Board of the Scotland Office and Office of the Advocate General, and serves on the board of Futurelearn.